Week 8 of The Next Big Thing

Thanks to Jonathan Gould for tagging me!

What is the working title of your book? Song of the Fairy Queen 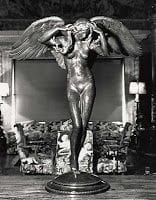 Where did the idea come from for the book

? I did a tour of the Hearst Mansion in California and saw this statue – Night Descending. For some reason the statue just caught my attention, my imagination took off and I saw her descending onto the parapets in the thick of night while flames roared below her. (I now have a replica of the statue at home.)

What genre does your book fall under? Epic fantasy

Which actors would you choose to play your characters in a movie rendition? *grins* I’m not telling. I already have the cast in my head – all but Kyri. There are just some actors that come to mind for certain characters, and in this book it was true. I like readers to form their own visuals, however.

What is the one-sentence synopsis of your book? If you’re in dire need, call the name of a Fairy, and she will come…

How long did it take you to write the first draft of your manuscript? About a month, which is a little long for me, but there were some interruptions – just life…

What other books would you compare this story to within your genre? To be honest, I haven’t seen anything like Song of the Fairy Queen, and neither have any of my readers.

Who or What inspired you to write this book? There was that scene described above, and then pure imagination. I like to see where flights of fancy take me.

What else about your book might pique the reader’s interest? If you like classic fantasy with a strong heroine, interesting characters and a strong plot, you’ll like Song of the Fairy Queen.