In Memory of a four-footed friend – courage and strength 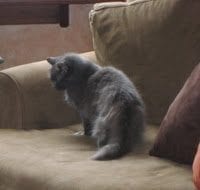 I lost my Bay last year at this time – she was 21. A pretty soft gray angora mix she’d survived one of those hoarder houses where they have cats and dogs all crowded together – one of the few who did. The police raided the house after complaints.
The next day my policeman brother showed up at my apartment with a small box. Inside the box was Bay. Her eyes were still blue and covered in fleas, she was too young to be flea-dipped so I had to spray her down and wrap her in a towel. It was NOT her favorite activity. But she forgave me over time, hopping up into my lap to curl up in it and suck her thumb. Yes, you heard me, she sucked her thumb. Like many kittens separated from their mothers too soon (and my new kitten Mendy) she never lost the need to suckle.
Many people thought she was imaginary, or a ghost cat. Extremely shy she tended to disappear when strangers were in the house. She was a great judge of character – unlike her adopted brother Trey who never met a stranger he didn’t like – she would only allow a rare few close enough to touch her silky fur.

A year or so before she passed she lost her sight. I saw it when it happened, it was like a stroke or something. She twitched as if she’d been struck or heard a loud noise and then went still for few minutes. But she was incredibly resilient. After few moments, she adjusted, and then she started to walk – until she bumped into something. She continued walking around the entire house, including two sets of stairs, until she knew where everything was. Then she went on as if nothing had happened. If she wasn’t sure what was in front of her, she would pat the object with one paw and sniff until she determined what it was.
When she went, it went relatively fast, as it had  with her brother (they weren’t related by blood, but by love, they tended to sleep curled up with each other). Both breathed their last in my arms, which was as it should be. They had been my companions through some of the most difficult years of my life.

It took only a month before the absence sent me in search of another furry friend, and that’s how I met Pi. (Because she’s a piebald pirate cat) Stuck in an end cage, she was likely considered unadoptable because she only has one eye but she’s another sweetheart, hopping up on my desk to give a little love.

*grins* Four months later, I found Tango in the middle of the road, determined to get the last crust out of a MacDonald’s bag despite a broken jaw and frostbite. All I could see was his orange/ginger bottom and this looooong tail.

Two months ago, someone with two many kittens decided to toss a spare one out of their car at our dogs Ruby and Ella – they just didn’t know that the dogs wouldn’t hurt her. Unfortunately, neither did Mendy but they did keep her in place long enough to be rescued.
So, now with Billie Jo (no picture, sorry) our indoor/outdoor cat, we have four cats, each unique, and two dogs (coonhounds), and the infamous African horned frog, Hopper, who delights in driving Bay crazy by splashing in his tank when she gets near.