Julian Luceanu was rich, powerful…and tired of the kind of women who only wanted him for his money. Nor was he alone in that, there was his cousin to consider. He, they, wanted something more, much more. It would take a special woman… if they could find her. Internet dating seemed a little far-fetched, but nothing else had worked. But although paranormals were becoming more accepted, Julian had a secret that would put all their lives at risk.

“This was one great read! Fans of Sophie Oak, Chloe Lang, and Eve Langlais will find themselves with another author to thrill them. The sexual scenes are hot as hades and give you a genuine feeling of lust and love. The characters are as unique as can be and leave the reader with a sense of wishing you could meet them in person. Kudos!!!”

I have to begin with WOW.
Normally I don’t care much for a vampire story, but Valerie Douglas has turned my thoughts around. She has a way of drawing you in from the beginning and doesn’t stop till the very end. The characters were well thought out, the story entertaining, but her description of the love scenes are what captured my attention. I can’t wait to read Valerie’s next in this series. 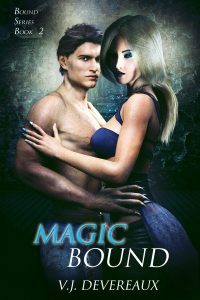 Homicide Detectives Sasha Gutierrez and Rafaela (Rafi) Stratford (Blood Bound) are investigating a series of murders that appear to have been committed by paranormals. A werewolf himself, Sasha knows neither his people nor vampires were the killers, despite the evidence. Desperate for clues they turn to Rhian Lewis, the proprietor of an occult bookstore…and a witch. What she discovers turns them all into targets…

This is a fun read. It’s definitely erotica — hot stuff, indeed — for the reader who likes paranormal novels. Witches and werewolves and vampires, oh my. 🙂 There’s also a twisty little mystery and nicely drawn characters. I enjoyed it very much.

It’s the second in a series and references the previous novel, but you can certainly read this one without having read the first.

Four Stars! Steamy read. The book eases nicely into some very hot scenes. I liked that the characters made sense and the erotica was situationally appropriate. The storyline could have gone horribly wrong if Douglas didn’t write like a professional. 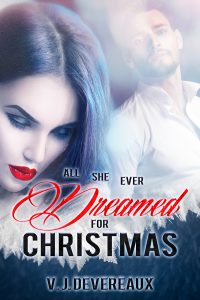 All She Dreamed for Christmas

The holidays, a time for dreaming, when Mikaela dreams of finding Travis Donovan unconscious by his cottage, it feels so real. She doesn’t expect to dream of him again…

What if you had a chance to make your wildest sexual fantasies come true for one memorable weekend? Would you take it? Connor O’Donnell is throwing a party to celebrate his contentious rise to CEO. He challenges the best chef’s of the city to create an unforgettable dinner. The prize? The prestigious position of head chef for his corporate HQ. Thanks to Cherry, her friend Patrick – a top chef – is one of those competing. Challenged to create a truly decadent, unforgettable dessert, he does – with Cherry’s help. Rumor holds that Connor shares everything with his best friends Jed and Erik. Cherry is about to find out.

A Top Pick! “I loved the characters and the way the story was written. I did not want to leave them when the story was over.” —Night Owl Reviews

The Internet dating site profile was simple and direct – “Special Delivery. If you’re a woman looking for good, safe, clean, no-strings sex, contact me. I always wear a condom, have no communicable diseases, and I can provide proof if asked.” The man in the picture was gorgeous with a come-hither grin. For Lacey MacKay – an attorney wrapped up in a high-profile drug case – he was just what she needed. She wasn’t really going to do this, was she?

Demon’s Kiss
Book One of The Book of Demons

Kidnapped, FBI Agent Angel Nicholas awakens to find herself in a vast underground chamber. Spotlighted in the center of that room is the most magnificent specimen of masculine beauty Angel has ever seen. He’s absolutely gorgeous. Yet everything she’s been taught tells her that he can’t be what he seems to be. A demon. Demons don’t exist. Yet she can’t deny the evidence of her own eyes. To her astonishment Angel also finds herself instantly drawn to him. She wants to run her fingers through his ebony hair, feel those strong hands on her skin… In all her life she’s never reacted so strongly to a man. Perhaps it’s his pride, or his courage, in the face of his captivity, because he’s just as much a prisoner as she is.

Their only chance of escape lies with each other…

Demon’s Embrace
Book Two of The Book of Demons

When Professor Miri Reynolds spots the incredibly handsome man standing in the shadows of the lecture hall, she doesn’t know he’s there for a purpose.

Ash has come to seek information about the ethereal, or temporal, planes in order to recover the Book of Demons. He’s not the only one looking, a shadowy corporation called Prometheus is hunting her as well, and they’re not afraid to take extreme measures.
What he doesn’t expect is his attraction to Miri Reynolds, or the secret she holds. And he has his own secrets as well

Lily Cavanaugh did it the hard way. She’d apprenticed under Master Chef Evan Taylor until he threw one temper tantrum too many. She was madly in love with him but so was every other woman who worked for him. So she walked away and built her own restaurant. Then Evan and the director of his new TV show, Dylan Bryant, walk into her restaurant to offer her an intriguing proposition…