Nike’s Wings – yep, she can do that 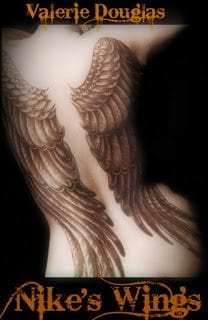 I grew up in first in the suburbs and then in the mountains, but in both I played the kind of outdoor games kids used to play. (And maybe still do in some places.) We took on the roles of characters from movies, played spies and cowboys, built forts and fought imaginary battles. Then, as now, I objected to being relegated to the ‘women’s roles’. And if you think that in this ‘year of the woman’ that there aren’t some people who want women to ‘assume the position’, then you haven’t been watching politics. Or you missed the meme with the girl with the gun walking into a rundown location with the caption – ‘she’d die if she went in there’. Would a man? What were they trying to say?
When I wrote Nike’s Wings I already knew that women were taking a more active role in the C.I.A. After all, Valerie Plame was plastered all over the headlines at the time. So it wasn’t that much of a stretch for me to imagine Nike. By then there was also Angelina Jolie as Lara Croft and Sigourney Weaver’s Ripley, too, and we’ve been seeing other kick-ass women. The one thing I did object to was the emotional distance in many of those women – it seemed as if they were really just men in women’s clothing.
I wrote Nike for a number of reasons, but primarily because I wanted to illustrate that some of the dangers this country – and other countries around the world – face come from a new kind of enemy. An enemy that doesn’t have a country but an ideology – like Al Qaeda – or only greed – as in the Mexican cartels and other crime syndicates like it. It was born of something I’d read about how terrorists could enter the country via known drug routes. I wanted to illustrate that danger.
Oh, and of course, I also wanted to write a great and entertaining story…
Yes, there’s a certain amount of politics involved in it – that was inevitable. We live in times that are far more political than ideological, and in ways with which I wasn’t always comfortable.
It took the opening sequence to a James Bond movie – and I wanted Nike to be a little like Bond without the martinis and elegant clothes, but more grounded in reality – to give me Nike’s capabilities. That’s where I really noticed parkour for the first time. A little research was all that was needed, and I knew that at one time I might have been able to do some of those stunts.
From all of that Nike Tallent was born – a woman highly trained in parkour, martial arts and assassination. I also wanted her to be well-rounded and realistic, to watch her grow from the distance her circumstances and career had forced her to maintain.
I took a few hits from people – particularly and surprisingly from women ( a few men objected to the politics) – about Nike and her abilities. (Others – both women and men – cheered.)
So I was exceptionally pleased, and more than a little vindicated, to see Zero Dark Thirty hit the movie theaters to such acclaim, featuring a female CIA operative in a prominent role. Not to mention that the director of the movie was also female. It was great to see Jessica Chastain take the Golden Globe award for her role in the film.
Despite everything else, though, Nike’s Wings was a fun and challenging book to write, I hope more people get the chance to meet her.