One of the things I find amusing is to listen to people talk about ancient cultures and describe the lives of those who lived then as ‘hard’. In comparison to ours, they definitely were. After all, most people barely lived past the age of forty and cause of death would be as likely from tooth decay. That was for men. We act shocked by the idea that young women of that time were married by twelve and old maids at fourteen, without considering that by the time their children were adults they’d already lived over half their lives. That’s if they survived childbirth, one of the leading causes of death for women. Many children died young, either in childbirth, or from disease or accident.

Yet if you asked those people if their lives were hard, they’d be surprised at the very notion. After all, it was all they knew. It was life, they lived and loved, worked and fought, had children they nurtured. Just like us.
Many archaeologists and historians, though, operating under modern prejudices of society and faith, made similar assumptions and judgments – those ancient cultures were barbarian, filthy and pagan, they must have led a miserable existence. This despite all evidence to the contrary. Don’t believe me? See how many movies portray the people of eras as unwashed, as if they didn’t know simple hygiene. Yet ancient Egyptians used makeup, balms and ointments – many scented – and were nearly obsessed with cleanliness. It would take Christianity to make bathing a sin. In truth most ancient cultures were far more advanced, happy and egalitarian than assumed.

For the ancient Egyptians, its clear from their writings and their statuary that marriage was a sacred institution for them, and husband and wife were considered equal. As were women in general, many of whom ran their own businesses.
In most ancient societies the relationships between people, whether as couples or friends, were important and valued. If you read their writings, without the cynicism imposed by our own society, you can see it. In ancient Egypt husbands wrote to wives and wives to their husbands, of their devotion to each other without shame or embarrassment. Something that in our society until the last half century. Imagine something like that now.
There are tales throughout history of friends who sacrificed their lives for each other – now we refer to such friendships in derogatory terms like bromances, or BFFs.

People also had rights many today would envy. In early Rome women could get divorced and own their own property, something that didn’t exist in some parts of the US until this last century.
Yes, there was slavery, but slavery still exists in this world, and many slaves had better rights than many of those who work on production lines or in cubicles, since their owners were at least required to feed and clothe them.
Cultural assumptions were also much different, or non-existent. Homosexuality wasn’t an issue. In many cultures no one cared.
Sexual roles were also less defined. Without the societal assumption that women were the ‘weaker’ sex, women in those ancient cultures were able to do any job or hold any career they wished. Even serve in the army.
For example, in some pre-puebloan societies it was men who did the weaving – a task considered women’s work for many these days – and a boy who wished to court a girl took a particularly fine blanket, woven by his own hands, to his prospective mother-in-law for judgment.
Yet in much of our writings we tend to condemn those societies based on our own cultural assumptions. It’s easy to do so, after all, through the lens of our own judgments.
For instance, we condemn Cleopatra and portray her as being a harlot for marrying her brother but by the terms of Egyptian culture, what she did wasn’t sacrilege or incest, it was their culture. After all, the Gods Isis and Osiris were also brother and sister (a neat way to explain how the first gods managed the whole procreation thing, unlike in the Bible, where a whole different tribe just appears).

What we do tend to forget is that some of these cultures existed, relatively peacefully and successfully for centuries longer than ours has.
We are fond of the image of Rome as that of the Coliseum and the ‘poor Christians’ being thrown to the lions. It was a fairly common, if brutal, punishment for criminals in those days. Yet from the point of view of the Romans, many of those early Christians were criminals, condemning the religion of others, fomenting rebellions, stirring up slave riots and fighting among one another. And much of that image isn’t historically accurate either.
We condemn ancient Rome for its excesses and yet some in the US Congress or on Wall Street could certainly give them a run for their money. As we also tend to look down on the pharaohs and early Caesars but most of them understood  they held their place at the will of their people. More than one ruler found himself overthrown when they forgot that. Some folks in power now might do well to remember it.
Given the importance of interpersonal relationships among those early societies, an argument could be made that the first sign of their failure was when those relationships were devalued, when the excesses of those in power diminished the value of those relationships and began to take away their rights. Not that they were all perfect, but in many cases they were far better than we’ve assumed.
Some of what we know now appears relatively new, but isn’t, but the assumption that there’s nothing new to learn is equally untrue. 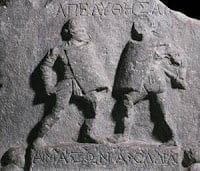 The burial place of a female gladiator was only recently – relatively – accepted as such, in spite of  the fact that  all evidence pointed to her sex as being female. The evidence for it long existed, it just couldn’t be seen past the lens of our own assumptions.
We’re still uncovering new information. They just recently discovered previously untouched (except by thieves) ancient Egyptian tombs.
We now know that we understand much less about the ancient Incan culture than we once did, based on new discoveries.
So, are you or will you write your novel from the point of view of your cultural upbringing, to espouse a certain concept, or will you try to write it without preconceptions? And how will you market it? As ‘factual’ or as a ‘re-imagining’?
There is a group of reviewers that say they’ll review your novel, not just the quality of the writing, but for historical accuracy. My only question is, whose history? From which point of view?

For example, if you’re writing a western, and you want your female character to do certain things, would her actions have been acceptable or even possible for the period? I had started one, but was caught short by questions about that era. A little research reassured me that not only was my concept possible, it was even more likely to be right than the images we have of western women now. I’ll definitely be citing my research on that one.

In a few days I’ll be releasing a new book, a thriller/horror/romance based in time of the early dynasties of ancient Egypt. I’ll make no claims that it will be 100% historically accurate – it is fiction after all – but I did try to stay as true to that era as possible. For example – I had my heroine riding a horse, possible given where she’d come from but unlikely even then, and certainly in ancient Egypt. The horses of that time hadn’t advanced so much, they were much smaller. Breeding and time would change that.
The problem is that many people assume the author made the effort to do the research and so believe a lot of what they read. However I know a lot of books that were/are wildly inaccurate historically, others just mildly. Bodice-ripping is much harder to do than most assume. And let’s not talk about the movie Pocahontas. I also had someone chide me about the danger of using the word Nike in the title of my book Nike’s Wings – it was clear  the individual had no clue that Nike was the Greek goddess of victory and not just a shoe manufacturer. Most of us know of a few novels written about ancient cultures from a specific point of view and some of those authors have quite a devoted following. If the native cultures they described could read those books, I wonder if they would recognize themselves? Especially given that some historians and archaeologists now question some of those assumptions?
So, what does this mean to us as fiction writers? (Non fiction writers have different issues) What are our responsibilities when it comes to referring to or describing these incredibly complex ancient cultures? First, before we put pen to paper, we must decide how true to that culture we want to be, how fictional is fictional? What do we owe those ancient societies? What do we owe our readers?
Honesty, that’s all.