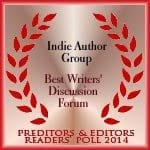 Thanks so much to Preditors and Editors, and all the members of the Indie Author Group!

I didn’t want people to go through what I did, make the same mistakes, and/or have to search through dozens of pages, or through endless threads, for what they needed. I wanted to create a site where all that information would be in one place and there would be a reference library of sorts where people could go to find lists of promotion sites, editors, cover artists, etc.

With the help of Kai (Donna) and few others, we created the Indie Author Group, to share our experiences.

I started out by trying the traditional route. I learned to write query letters, and attended cons. One local con brought me in contact with an editor who liked the premise of the book I was pitching for their new line. Then… nothing. No response. Checking out their site, it was clear that their general offering wasn’t what I was writing. Reading a few, though, I thought, I can do that. So I did. To put it kindly, it didn’t work out. I didn’t like the lack of control in the editing and cover art process, and they wanted to make changes to my novel I had difficulty with. Then everyone started talking about Amanda Hocking. 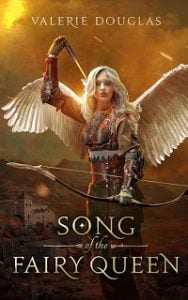 In those early days Smashwords was the primary game and I put one of my books there.
(Song of the Fairy Queen) Then another. Within a few months, I was making about the same amount as I was making in my day job. Not a lot, but nothing to sneeze at.

I also discovered one of the truisms of writing – nothing sells Book One better than Book Two, and so on.

So I quit to write full time. Then Amazon created Kindle Direct Publishing and I started making real money. Several of my books were in the top 10 or top 50 of their category.

I also nearly made a critical mistake by getting involved with a so-called ‘Indie Publisher’ that was really a vanity press focused on print books, and I learned very quickly that they couldn’t do anything for me that I couldn’t do better on my own. (I only gave them one book, and thankfully got it back fairly easily.) I also found Pred-ed – the site created to warn writers about bad publishers, editors, promotion sites, etc.

When Amazon added Kindle Select, I was one of the early ones to jump on that bandwagon. Within the first month I was making thousands of dollars and my books were hitting the tops of their categories. Not free but paid.

As time went by, and the initial euphoria wore off, the maxim ‘it’s not a sprint but a marathon’ was proven. So I and others hunted down promotion sites, tested some, tried others, and other methods.

Everything learned was shared with the Group.

A ‘reference library’ of services and service providers was created in Files so members who needed a service like cover art or editing, or the people who provided them, could find one list to reference (or add themselves to). Another was created of proven promotion pages. Each would save people time and leave the main page free for questions about writing. It would also allow the service providers to reach all the members, not just the one on a single thread.

At first we allowed people to promote but rapidly discovered that some people joined the group just to promote themselves. So it was decided by the members as a whole – they were polled – to not allow promotion.

Over time the Group grew. Moderators were picked based on experience and/or personality. Some were removed for various reasons, but the core group has remained the same.

We had to set some rules to make certain the Group would remain true to its original intention – helping writers produce a professional product while helping to give them information that would help them become more successful writers. It seems to have succeeded.